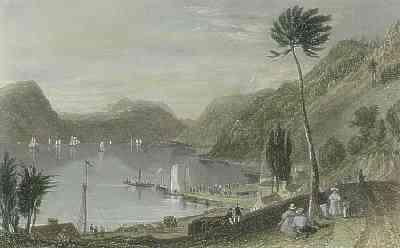 New Amsterdam resident Jan Peeck made the first recorded contact with the native tribal people of this area, identified at that time as the "Sachoes". The date is not certain (possibly early 1640s), but agreements and merchant transactions took place, which were formalized into the Ryck's Patent Deed of 1684. Peeck's Kil (meaning "stream" in Dutch) thus became the recognized name for this locale.

European-style settlement took place slowly in the early 1700s. By the time of the American Revolution, the tiny community was an important manufacturing center from its various mills along the several creeks and streams. These industrial activities were attractive to the Continental Army in establishing its headquarters here in 1776.

Though Peekskill's terrain and mills were beneficial to the Patriot cause, they also made tempting targets for British raids. The most damaging attack took place in early spring of 1777, when an invasion force of a dozen vessels led by a warship and supported by infantry overwhelmed the American defenders. Another British operation in October 1777 led to further destruction of industrial apparatus. As a result, the Hudson Valley command for the Continental Army moved from Peekskill to West Point, where it stayed for remainder of that war.

Hawley Green, a resident of Peekskill during the Civil War era, was an African American citizen who voted, ran a downtown barber business, and owned several properties with his wife Harriet. Mr. Green was credited before and during the war with "helping many a slave brother on his way to Canada." Active assistance given by AME Zion Church members, Reverend Beecher, local Quakers and the Greens was part of the famous "underground railroad" of freedom in Peekskill during the 1800s.

Peekskill's first legal incorporation of 1816 was reactivated in 1826 when Village elections took place. The Village was further incorporated within the Town of Cortlandt in 1849 and remained so until separating as a city in 1940.